This is our perch in Copacabana, Bolivia. Kyle sits in a hammock, sketching furniture. I am reading a treasure of a used book find, Barbara Kingsolver’s The Poisonwood Bible. Considering I traded an awful Robert B. Parker mystery for it, I scored big.

While enjoying this beautiful view, we can’t breathe in too deeply because a family of pigs is directly below us.  In addition to their smell is a constant chorus of contented grunting, which is rather meditative. 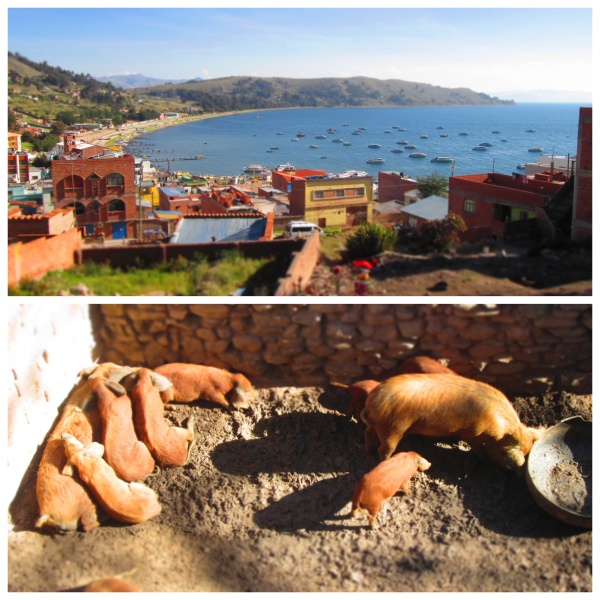 Bolivia has been a surprise. After Argentina, it was hard to imagine the natural beauty that awaited us here. I believe I’ve been on another planet these past two weeks.

I’m behind on posts. I should share our views on Salta and northern Argentina, but I want to be in the moment and that is here in Copacabana. A four hour bus ride from La Paz, on Lake Titicaca, it’s a small town with an amazingly large 1640 Spanish Basilica. The town has given way to tourism, with hostels on every corner, tourism outfitters all variations on the name Titicaca, and restaurants boasting things gringos like….hamburgers, nachos, vegetarian food. 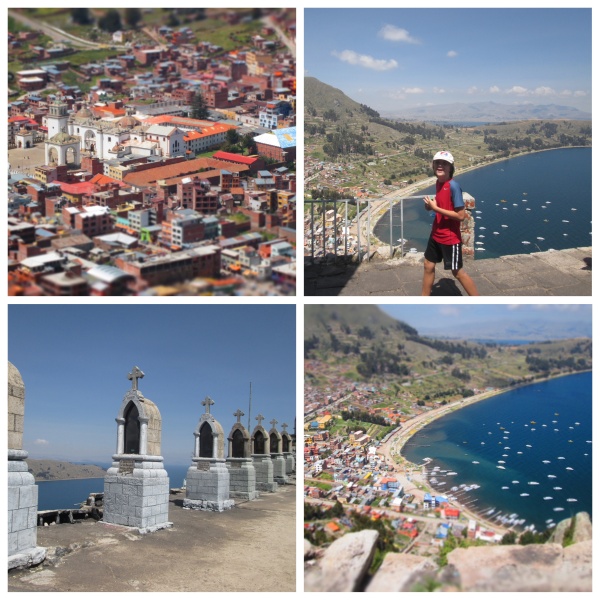 Yesterday we, and every other tourist here, boarded small boats for the two hour ride to the Isla Del Sol, an island of Inca history.  We paid $25 Bolivianos (US$3.50) per family member, even though I was sure I’d just heard the boat captain charge the people in front of us $20BS. I asked twice and then let it go…maybe my Roche Harbor baseball cap exuded wealth.

Upon disembarking at Isla Del Sol, local tour guides stopped each group to give them rules of the island and try to secure that group to guide. We are perpetual loners and escaped on our own. I had read of multiple entrance fees for trail upkeep and indeed there were three along the way. I expected the first $10BS and then the $15BS, but by the time I got to the $5BS check point, I felt a bit used. I had to remind myself, it’s US$4.00 at the end of the day and the hike was truly stunning. 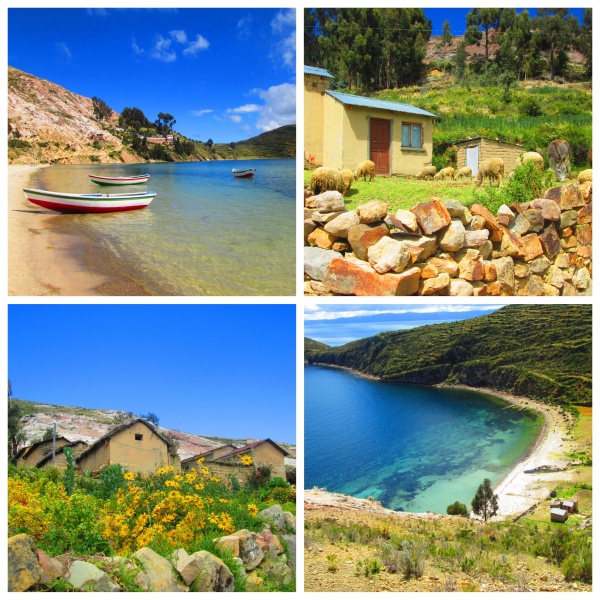 This was our first high altitude hike, an easy 4 hour meander if not for it being at 12,600 feet. So while our hearts beat loudly, we took in a landscape that seemed reminiscent of the Mediterranean. Rocky paths, wild flowers, the occasional sheep and the never ending Lake Titicaca stunned. The Inca ruins were fun to see but not spectacular. It was the natural scenery that took our breath away.

When we reached the south end of the island, it was more built up with hostels, restaurants and amazing perches above endless views. I could see spending a night here simply sipping a beverage while never tiring of the vista. The backpackers were endless and some of them I absolutely love but you’d have to find the “fanciest” accommodations of the island to avoid smoke and noise…unless that’s what you’re seeking! 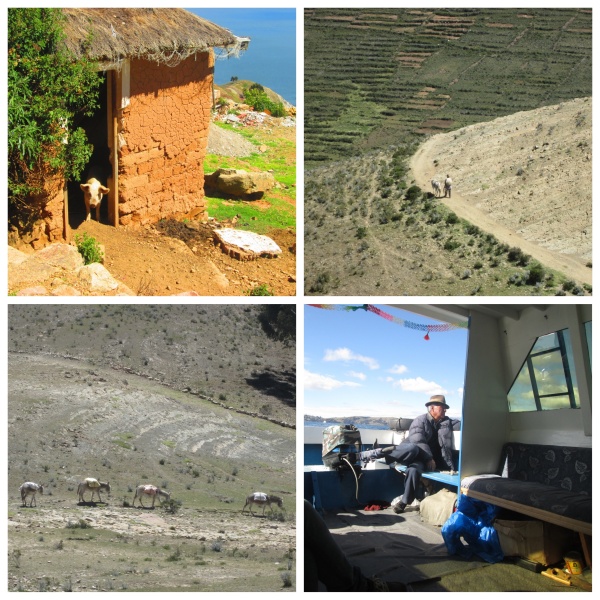 Returning by boat there’s a 3:30PM and a 4:00PM for $20BS, all of which make a brief stop at the ruins on the south end of the island and then take an hour to reach Copacabana. It was a beautiful day.

The following day we slept in, then climbed up to the Stations of the Cross outlook behind our hotel, The Cupula, where we focused on one step in front of the other, breathing hard…would we ever get used to the altitude? I think if I could train myself to run a few miles here, I could be a great athlete when we return home. We admired the views and then decided to spend the rest of the day perched above Copacabana, good book in hand, listening to a choir of pigs make their music.

Two Wheels to the Ends of the Earth