After three days driving through remote Bolivia, we arrived to a hostel in the middle of nowhere, made entirely of salt. We queued for a much needed hot shower — the first in three days — while rumors spread that the water was almost out. With roughly ten different nationalities represented among the 20+ of us queued, I wondered if an international incident was imminent. Fortunately we all behaved.

Ten year old Lupe manned the shower entrance and we had to pay her 10 Bolivianos for the privilege and an additional 20 for a towel. Later that evening, Lupe came over to observe our game of cribbage, catching on quickly, even switching teams when she realized Kyle was winning. She also joined a game of UNO and showed us no mercy. Made me wonder what a whip smart young girl grows up to do in rural Bolivia.

The Uyuni salt flats of Bolivia are on the wish lists of most intrepid travelers. We see the amazing perspective pictures where the ground and sky seem one in the same. A popular way to visit the salt flats is as part of a 4-day jeep tour of the Bolivian SW outback. I came to see the salt flats, but my understanding of what earth looks like was rocked by the landscape that came before.

There is no question that those four days will be in the top five experiences of our eight months abroad. The landscape was surreal. One sight we saw was the Dali desert, named after Salvador Dali and that gives you a hint of the otherworldliness of what we saw. 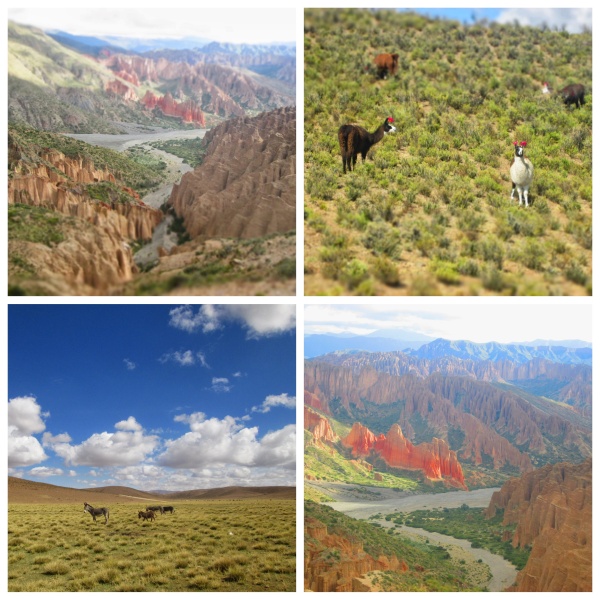 First things first, you have to pick a tour and they run the gamut from very high end to what were you thinking. There’s an awesome string of reviews on TripAdvisor about a horrible tour company, in which one person after another talks about their driver being drunk, their life in danger, a tourist being left to die at the side of the road with altitude sickness….and this company is still in business…who doesn’t read TA anymore?!

Well we did and we ended up with mid-range Tupiza Tours, which starts in Tupiza and ends in Uyuni. Tupiza limits to four people per jeep, which is best as you will become one with that jeep for four days…it will bounce your skeleton all over the place and you will likely leave a few breakfasts on its floor. Trust me, it’s worth it. Once we learned the secret of kicking off our day with 1/2 a Dramamine, we could relax in the jeep and just enjoy the beautiful scenery. 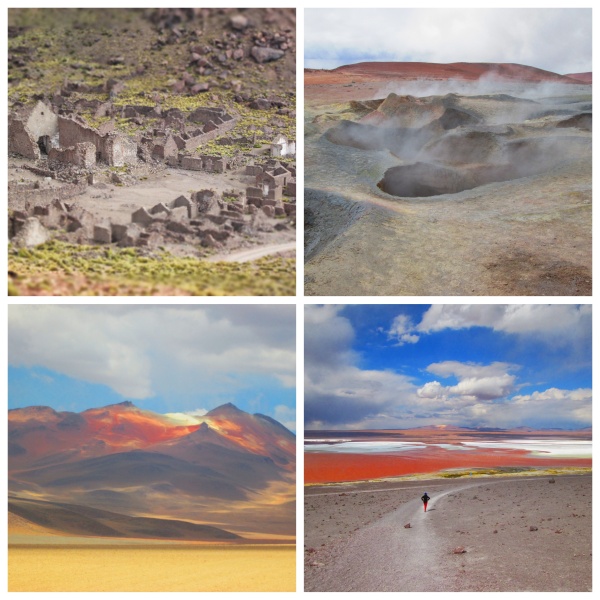 Our driver was Wilmer and our cook Maria. They spoke Spanish, my family speaks English and I speak Spanglish. It forced me to improve and Wilmer was very patient with me. Tupiza had four jeeps heading out that day and you travel as a caravan across the desert with many other tour jeeps criss crossing around you.

We were glad we had conditioned ourselves to the altitude in Northern Argentina as you sleep above 4,000 meters and reach over 5,000 meters during the four days. We experienced slight headaches but were fully functional. 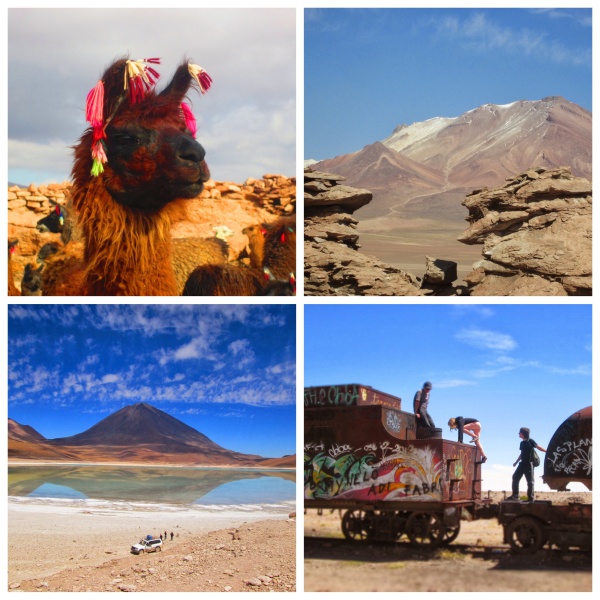 Maria whipped us up a daily breakfast, lunch, afternoon tea and dinner.  She surprised the kids a few times with chocolate treats as we hurtled through the desert in the jeep. We had our fill of fruits and veggies and meats. How she produced this fare from the back of a jeep, I’ll never know. She kept us warmed against the chill and altitude with cinnamon and coca tea. Ahhh, Maria.

The accommodations were actually better than we expected…cement rooms with four cement beds, a thick mattress and loads of blankets. We shared one bathroom among 12 people. No showers…too cold to undress anyway except the aforementioned third night.

What did we see that was so amazing? Multiple volcanoes, one spewing steam. Candy colored lagoons — blue, red, pink, green, white. Three different types of flamingoes, up close and personal. Stinky hot hurtling geysers. Pre-Inca deserted towns. Mountains of dazzlingly colors. Deserts that never end. And the smooth, white salt flats that seem to be at the end of the world.